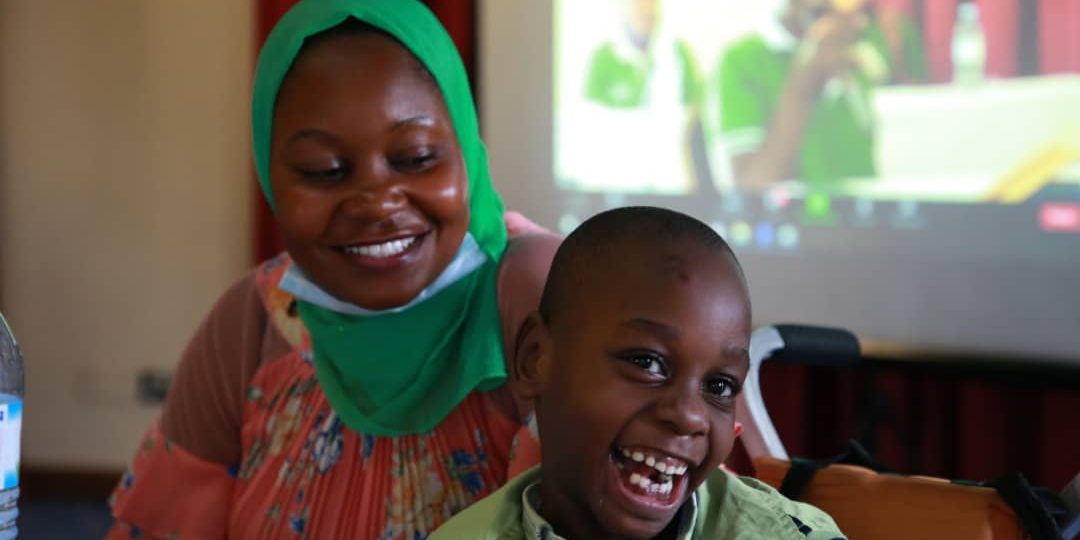 Six-year-old Rahmah Kiiza is a special guest at World Cerebral Palsy day.
She is in a wheelchair, on the front speakers’ row, seemingly attentive, sometimes making random noises during ongoing speeches and testimonies.
Rahmah is one of 900 persons with cerebral palsy registered by the Uganda National Association of Persons with Cerebral Palsy (UNAC). The estimated crude cerebral palsy prevalence for children aged 2–17 years is 2·9 per 1000 children in sub-Sharan Africa. (1)
This year, UNAC has a theme ‘Make your Mark; break barriers for persons with cerebral palsy in Uganda’.
Rahmah is the only girl, third and last child of three born by Latifah Muzaki. She follows a set of twins. When Latifah was pregnant with Rahmah she experienced high blood pressure in the second trimester. The child was born with jaundice but the midwife assured the mother all would be well.
Latifah just had to expose the baby to the sun for a few minutes and that is what was done. But a few months into her growth, it was evident that something was wrong.
Rahmah had slow growth, floppy muscles, joint problems, and speech issues. Latifah spent many hours in the hospital looking for solutions. The diagnosis did not come until six months later.
“Our disability is difficult to identify just as the data of people affected by cerebral palsy,” says Rashid Kalule the chairperson for UNAC. The database of who is infected is almost entirely absent. Even if the categories of the condition vary all are lumped in one group – as persons with cerebral palsy.
Cerebral palsy is a result of damage to the cerebrum which is part of the brain responsible for body movement due to environmental and natural causes. It affects muscle tone, movement, and motor skills hence, hindering the body’s ability to move in a coordinated way. By virtue of their disability, persons with cerebral palsy face significant mobility-related barriers that limit their full participation in activities of daily living as well as access to services and other opportunities. Such barriers place them in a vulnerable position of all kinds of abuse, ignorance, and poverty says Kalule.

He says they are among the most marginalized persons with disabilities in Uganda since Cerebral palsy is largely not recognized by mainstream National Development programs.

“Cerebral palsy has no cure. It requires patience and consistency,” advises Asiimwe.

After the diagnosis, it was full time looking after Rahmah. Latifah lost a job. Her husband ran away. “He said he cannot be the father of such a child,” says Latifah with all the sadness in her eyes.

“Fathers quit easily due to stigma. At UNAC we are trying to bring fathers on board,” says Christine Kirungi, the executive director of UNAC.
The community turned against her. She was isolated and called all sorts of names – witch, the mother of a child with a disability, she had bad luck and it was payback time. “My relatives told me to go back to where I got these problems. I thought the child was not mine. She was given to me by mistake.”
Kirungi says there is limited knowledge on Cerebral palsy in communities and increased abuse of persons with cerebral palsy by their family members and surrounding communities. Another challenge for caretakers of children with cerebral palsy is feeding. Many of the children with cerebral palsy are malnourished which makes them susceptible to infection. These children eat special food – ‘soft and porridge-like’ and have low appetites so they suffer a lot from malnutrition.

After losing her job as a secretary at the Ministry of defense, her husband abandoned them, Latifah turned to her talent and what she loves to do best – decoration. She now decorates for weddings, parties, and even conferences. She learned to ignore the abuses, live with the stigma, and focus her energy on creating awareness about cerebral palsy in communities. She also started appreciating all the milestones Rahmah achieved and now calls her a miracle child renamed ‘Mukiisa’.

She learned new local innovations. One such tip that she says has improved Rahmah’s life is the soil technique. In Uganda, some parents dig a hole in the ground put the child with cerebral palsy in a standing position in it, and cover the child with clean sand or soil. The soil is up to the neck. It can be for minutes or hours – for as long as the child can endure.

It is the equivalent of a standing frame that costs about $100 or UGX 360,000. Since a child will need a new standing frame at every stage, parents of children with cerebral palsy said they are costly and unaffordable. Moreover, children also require essential drugs for life. “At first she stood in the hole for about 30 minutes but she cried a lot even when I was sited by her side and assuring her,” says Latifah. Gradually, the duration was increased to 45 minutes and now she stands in it for an hour.

Rahmah is not bothered by standing in the sandpit anymore. While in it her twin brothers keep her company and the watchful eyes of her mother are always close. “Rahmah was floppy but now the backbone is firmer, she is more stable. It has helped her backbone and joints,” says Latifah. On top of that, she attends physiotherapy.

Stephen Muhumuza attests to benefiting from this local innovation. “My mother died when I was only a day old. I lived with my grandmother a natural therapist. I could not walk until I was 10 years old. My grandmother put me in the soil pit and it helped,” says Muhumuza how 45 years old and with a family.

Kalule who also says his condition improved due to the pit and soil innovation explains the three models of disability in Uganda as thus. “In Uganda, we have three models of disability; the belief that disability is a charity and you have to depend on begging to go survive that is why most parents do not take their children to school. The second model is medical where they take you to the hospital or rehabilitation and forget about you,” says Kalule.

He urges all Ugandans to embrace the third model. “With the social model, we can break the barriers and work together.” “

“I may be with a disability today but if we work together we can break the barriers,” says Kalule.

(This blog story is especially for awareness creation on Cerebral palsy. I salute all the mothers like Latifah who have taken time off to look after their children and not abandon them. God bless the mothers. EN)
Category: BlogBy Esther NakkaziOctober 20, 2020Leave a comment
Tags: #Cerebralpalsy#UgandaCerebralPalsy#UNAC#WorldCerebralPalsyday
Share this post
Share with FacebookShare with Google+Share with TwitterShare with PinterestShare with LinkedIn