A tribute to two great advocates, story tellers and mentors to many

It is not possible to honor all the health workers, advocates, and media personnel who have died of COVID-19 but telling the story of Dr. Charles Kiggundu and Patrick Luganda may serve as a tribute to them and others.

Both Dr. Charles Kiggundu and Patrick Luganda were consultants in their fields, advocates of difficult topics, mentors, passionate with their jobs, high achievers, great communicators, and storytellers. They also, unfortunately, lost their lives to COVID-19.

Dr. Charles Kiggundu, a consultant obstetrician and gynecologist was born in Kasiso, Kasana in Luwero district and died on 29th December 2020, aged 55 years.

I last talked to him on 26th September 2020, when the Health Journalists Network in Uganda (HEJNU) in partnership with the Association of Obstetricians and Gynaecologists of Uganda (AOGU) held a science media Café on safe abortion in health care.

Dr. Kiggundu was one of the speakers at this Café and he had been a speaker on many more topics around reproductive health rights with us and was a friend of HEJNU. This time it was in commemoration of International safe abortion day of September 28th.

I was the moderator but it was initiated by one of the HEJNU members and it was a Saturday so I was a bundle of nerves about timekeeping, speakers, and HEJNU members showing up. Dr. Kiggundu was already at the venue when I got there. He had arrived over 30 minutes early.

He was his usual self talking about how COVID-19 had affected reproductive health, giving insight about different issues as the questions were flowing from HEJNU members who showed up early before the function started, and giving story ideas about his favorite topic; access to safe abortion. He was brilliant, passionate, easy to talk with and he liked to tell stories to illustrate a point.

From a media perspective, he was a devoted, unselfish individual always ready to share his knowledge and a fierce advocate for maternal health rights and for his patients. Due to personal values, religion, beliefs, and how society will judge most people will steer clear of discussions around topics like abortion, GMOs especially with the media.

Dr. Kiggundu was never afraid to speak about access to safe abortion. He was friendly with everyone and thrived in leadership roles with a down-to-earth style that made us in the media comfortable asking him about anything in his specialty.

“Some times, I would interview him from Kawempe hospital many times sparing about 30 minutes of his precious time from his patients. He became a good friend,” says Agaba.

“His death is a blow not just to us but to everyone who has drunk from his wealth of wisdom, including several civil society organizations, Sexual and Reproductive Health Rights, and women’s movements. That he will be greatly missed is an understatement,” said a statement from CEHURD.

Scientists like Dr. Kiggundu all over the world are gems, hard to come by so losing him is going to create a void in that space that is very hard to fill. He delivered on his promises, served above self and we shall greatly miss him. He did exactly what his last post says on LinkedIn.

Dr. Kiggundu’s last post on his Linkedin account says; “Let us work to leave a mark. Work to be well remembered ever. Leave society better. Don’t just do what people will quickly applaud. Do good.” #RIPCharlesKiggundu

Patrick Nkono Luganda: “Many agree Patrick Luganda, will be remembered as the father of agriculture journalism in Uganda, climate journalism in the greater horn of Africa and a mentor of many senior journalists,” said an article published in the Sunday Vision. 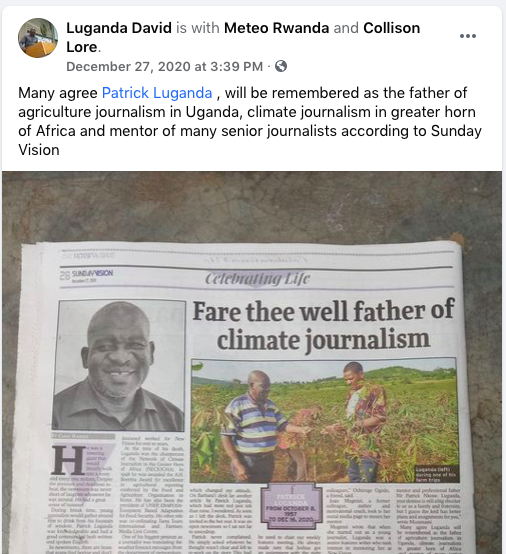 Patrick Luganda was a science journalist, a consultant, a trainer, a farmer, and co-founder of many media organizations including the Network of Climate Change journalists of Greater Horn of Africa (NECJOGHA).

At the time of his death, he was the Executive Director of EBAFOSA /UNEP that seeks to combat food insecurity, climate change, ecosystems degradation, and poverty in Africa using an innovative approach. He was born on 8th October 1957 and died on 16th December 2020.

I first met Patrick in 2006 in Nairobi at a training workshop organized by the World Federation of Science Journalists (WFSJ). We were both mentees and paired with mentors. Patrick could easily have qualified as a mentor. I didn’t know much about science journalism then but I was ready to learn, and to be mentored, most of us in that cohort were and so was Patrick even if he already was a seasoned, award-winning journalist. His mentor Hanns described him thus:

In 1999, Patrick co-won the A.H. Boerma Award worth $10,000 and an all-expenses-paid visit to Rome to receive the Award with his spouse. He reported extensively on the cassava mosaic viral attack causing food insecurity for thousands of people and his efforts also resulted in a rapid technology transfer that restored the food production of cassava.

“Mr. Luganda’s concrete and descriptive way of featuring policy and decision-makers, research and beneficiaries on an equal basis, makes him a journalist of outstanding caliber. His weekly programs on Radio Uganda intended for rural communities have encouraged this sector to apprehend and implement improved agronomy methods,” was described.

During the WFSJ mentoring program, Patrick was never assuming, as much as he knew so much he was always willing to share his knowledge and pretty much followed through with the program that lasted for four years.

I have already talked about difficult topics in the media and climate change is one of those but Patrick easily trained, advocated, and simplified it to a level that even those who did not care listened. He was passionate about innovations in agriculture and trained, preached, and lived them practically. He loved to tell stories, use illustrations as he was training, and speak in different languages that simplified science and technology to the basics. 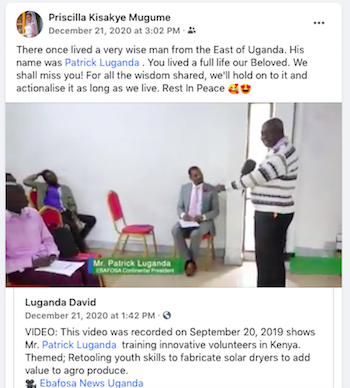 Patrick was such a great speaker on climate change he received the loudest applause on any panel I have participated in at a conference. So in 2009, we both were panelists on a roundtable about climate change at the 7th World Conference of Science Journalists in London. I had just returned from a year-long fellowship from the USA and was very confident and pleased with my submissions.

When I listened to Patrick on that panel there was no doubt about the passion, energy, knowledge, and ability to deliver and the audience, of course, reacted with a big applause. As we stood outside after the panel he was flooded for contacts. When I reminded him about that experience he encouraged me – ‘you will get there’ and laughed off.

Patrick loved his family. I don’t remember ever having a conversation that did not meander to the kids, his parents, or family. Losing him is going to create a void that is pretty hard to fill in the science journalism profession. #RIPPatrickLuganda

Insecurity may increase the burden of TB in the Karamoja region
April 7, 2022
Learning from the TB Pandemic
March 28, 2022