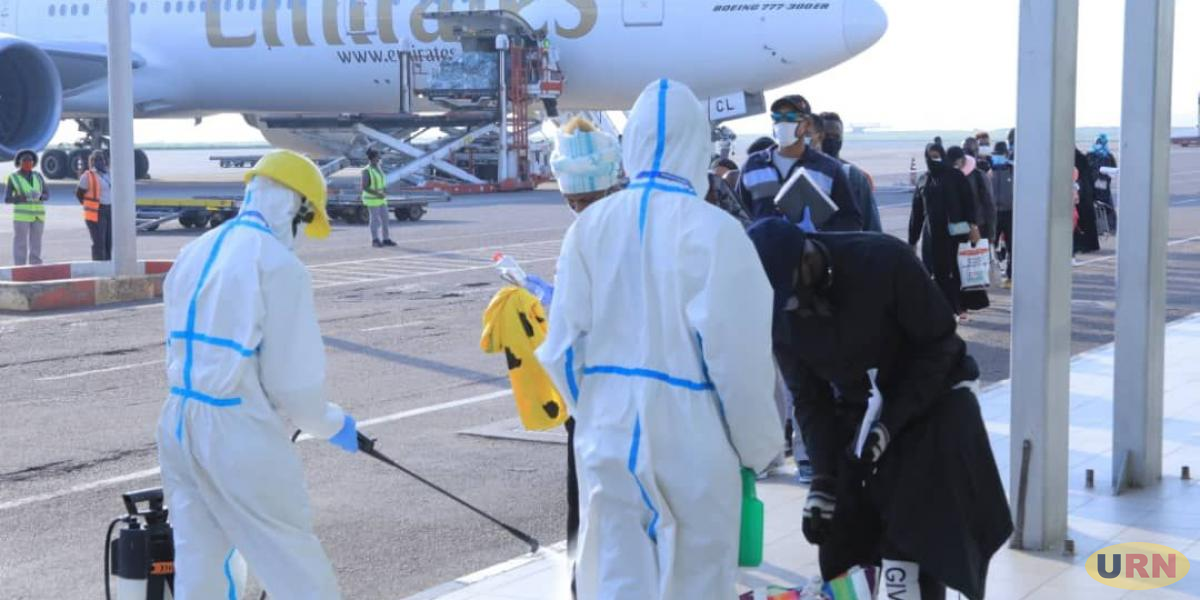 Several Ugandans seeking to return to the United Arab Emirates-UAE are struggling to meet the country’s revised travel restrictions during the pandemic.

UAE suspended inbound flights from Uganda on June 11, 2021, due to a surge in COVID-19 cases as the country was battling the second wave of the pandemic.

Some media reports showed that UAE the decision after over 200 Ugandans who presented negative COVID-19 test results tested positive upon arrival in UAE.

The travel ban imposed by UAE threw over 200 labour export firms in a crisis since most of their clients are based in the middle east, making Dubai Airport a key gateway.

On August 5th, 2021, UAE started allowing flights from Uganda for people with valid resident entry permits.  However, the returnees are required to take two PCR COVID-19 tests before their departure flight.

The first negative test result certificate must be issued within  48 hours of departure time.

The second one must be taken at the airport and the test result certificate issued four hours before departure. This means that travellers can only board Emirates and FlyDubai that operate direct flights to Dubai.

Dr. James Eyul, who is in charge of Port Health at Entebbe Airport on behalf of the Ministry of Health, says that samples are currently picked from UAE air bound passengers at the airport and tests are carried out at Peniel Beach.

Eyul says, “Since travellers to the UAE are still few, about twenty every day, their numbers are manageable. We pick their samples from the airport and ensure their results  are ready within four hours to their flight.”

Transit passengers are exempted from taking the second test. Ministry of Health established this testing centre at Peniel Beach for arriving passengers from ten countries including India, Kenya, South Africa and South Sudan.

However, some Ugandans who intend to travel to the UAE, say that they are struggling to meet the revised requirements. Sadik Lutaaya and Abdul Kajjubi, says that they returned to Uganda in May and June for a brief holiday.

He had lived in the UAE for 4 years. “I was very excited when I was told residents had  started  flying to Dubai.”  He, however, says that his excitement was short-lived because of the costs for the second COVID-19 test and the uncertainty of getting a resident entry permit also known as a back to service permit.

“The entry permit is free but approving an application can take hours or days,” he said. Kajjubi, whose resident visa will expire in 2024, says that he applied for a resident entry permit on August 8.

The permit had not yet been issued by August 10, when he was expected to travel aboard FlyDubai.

He says that it was painful that he missed the flight because he had paid Shillings 500,000 for the second COVID-19 test at Safari Labs in Katabi, Entebbe Municipality.

At the time, the health ministry had not yet guided that the second tests would be carried out at Peniel Beach. Kajjubi also paid Shillings 250,000 for the first test that was taken 48 hours before departure time.

Kajjubi is now counting his losses because he has to undertake fresh tests, the first costing shillings 250,000 and the second one at shillings 350,000.

Amidst the losses, Kajjubi is optimistic that he will be successful this time around because he has secured the return entry permit. “I’m just looking for money to undertake the two COVID-19 tests.”

Kajjubi wants the government to tighten its grip on COVID-19 testing centres because the UAE revised measures are a result of fake certificates.

Lutaaya says the health ministry should also consider setting up a testing centre at the airport.