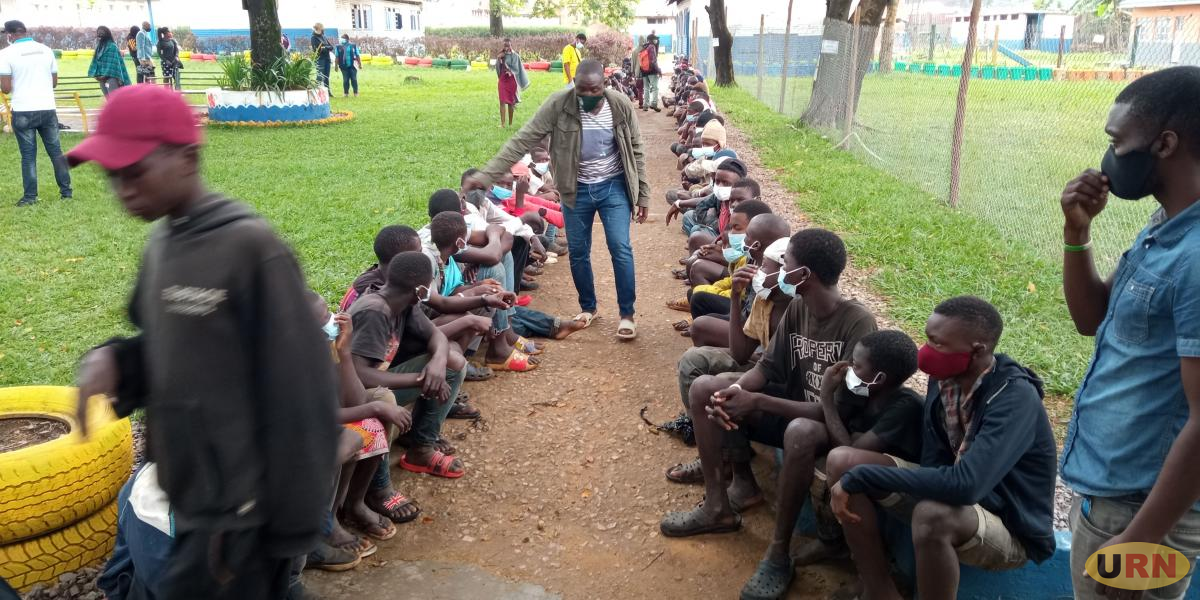 Prior to the lockdown, for the 145 street children currently housed at Kaazi Scout National Camping Ground, all they knew as home was the streets of Kampala.

In fact, according to Maureen Muwonge, the Deputy Director Dwelling Places, an NGO that finds safe homes for such children, they were 161
when they first collected them two weeks ago but 16 have found their way back.

Kampala City Council Authority (KCCA) embarked on finding these children a safe place to stay just after President Museveni announced a nationwide lockdown on June 18th restricting movement of both
vehicles and individuals in addition to closing some businesses.

Josephine Lubowa, the Deputy Director in the Gender Division says once they collected the children, they subjected them to a test where some emerged positive for the viral respiratory disease.

The Majority she says tested negative although she refused to reveal the exact number of those that were taken to Namboole COVID-19 treatment center for further treatment.

On Friday when we spoke, Lubowa and a team from Dwelling Places had just done a spot visit on the children to check on how their counselling sessions were going and interviewing these children on how they got to move from homes to the streets.

Muwonge says the aim is to ensure that even when the lockdown is finally lifted, these children could get a place they call home. She says a right to adequate housing and shelter is recognized in a number of International Human Rights instruments that Uganda is party too in addition to the national laws, although government has struggled over the years to find a permanent solution.

According to what they are planning, Muwonge says all the boys that tendered in themselves voluntarily will be taken through further rehabilitation after the lockdown to show them why it’s important for
them to stay off the streets and reunite them with their families.

“We have interviewed some of them and they said among the reasons they left home are; family wrangles, domestic violence, step parents forced them out but some do not have homes completely,” she says.

Activists intend to look for families that are willing to adopt the children. It should be noted that this is not the first time that such an initiative is happening.

Last year, during the first total lockdown, KCCA partnered with the Ministry of Gender, Labor and Social Development to find homeless children temporary shelter. Over 70 children were collected and put in tents at Nakivubo primary school in April at the height of the lockdown.

The then Major of Kampala Central Division Charles Sserujongi said the plan was to keep the children picked from places like Kisenyi and Nakivubo until COVID-19 the tension caused by the virus that was only
arriving in the country to calm.

Sserunjogi said they feared that these children would be exposed to the Coronavirus due to their life styles on the streets and yet shops that would offer them some food for survival had also closed.

Then, the Ministry of Gender introduced a plan to have these children attached to children’s homes so they could acquire life skills. None of that has happened to date but Lubowa says the programme has not been completely dropped even as nothing significant has taken off yet. In fact by the time the lockdown was completely lifted by end of the year, the streets were full again.

But, Hope Nankunda, a child rights activist sees some hope in this. She told our reporter on Friday that she applauds government for especially thinking about the welfare of the children during the lockdown since they are provided with meals and shelter when people supposed to provide for them are locked up in their homes.

She notes however that while some children go to the streets themselves, some are trafficked from different areas and are placed by unscrupulous individuals as a business.

“We know that they are placed there by Individuals and at the end of the day they hand over the money to these groups of people at the end of the day”, she says some NGOs have set up shelters for the children and the biggest solution according to her now is for authorities to capture individuals who are facilitating this process.

On his part, Another Activist Damon Wamara who heads Uganda Child Rights NGO Network says children go through in depth rehabilitation to be able to choose whether to stay on the street or back home.

While many returned to the streets after lockdown, he says a lot of those who went through the process have turned in themselves to NGOs that have shelters be incorporated into children’s homes or willing foster families.