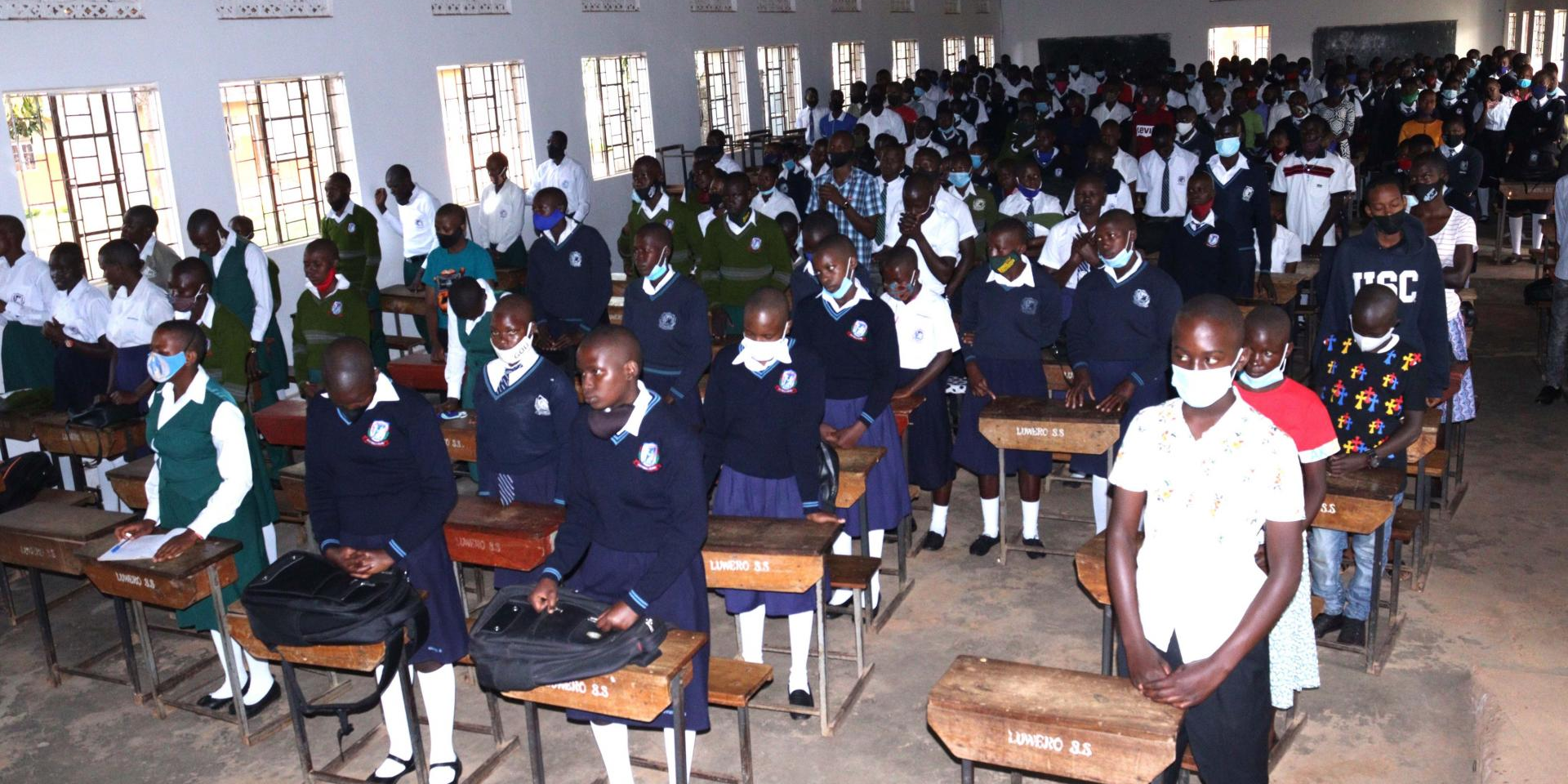 The final school term for learners in Uganda will close two weeks prior to the planned date.

This is in an effort to prevent the likely spread of Ebola in schools, the Ministry of Education and Sports says.

The announcement by the Ministry of Education means that the school term, which had earlier been scheduled to end on December 9 will close for the third term holidays on Friday, November 25. All schools are also required to immediately prepare for promotional and end-of-year assessments effective next week.

Dr. Joyce Moriku Kaducu, the Minister in charge of basic education, says that the school term has been reduced by two weeks as one of the means to decongest schools, which their health counterparts say is likely to increase the vulnerability of children to Ebola disease.

Dr. Kaducu explained that after evaluating experts’ views, it was noted that closing the schools earlier will reduce areas of concentration where children are in close contact daily.

Children are time bombs for spreading Ebola, since they require daily contact with their peers and caregivers.

According to the World Health Organisation, when contracted, children are at higher risk of dying from Ebola compared to adults.

Available statistics show that 23 children have contracted Ebola since the outbreak was first confirmed in Uganda. Eight of these have died, 5 have fully recovered and 16 are still under isolation.

The first cases among school-going children were confirmed in Kampala when 6 children from three different schools in Lubaga tested positive. One of the children succumbed to Ebola and 170 contacts were identified.  Cases have been identified in five schools in Kampala, Wakiso, and Mubende districts.

Ismael Mulindwa, the Director of Basic Education in the Ministry of Education, says that although the term has been cut short, learners will not be affected.

“These are just two weeks. Our learners will not lose. But if we evaluate and see that there is some learning loss, we will make sure that the lost days are recovered in next year’s calendar,” Mulindwa said before warning schools not to hold end-of-year school parties and speech days.

Drawing from the COVID-19 experience where many learners were stuck in taxi and bus parks and ended up becoming super-spreaders of the virus, the ministry of education says that as boarding school learners return home strict guidelines are to be adhered to.

Some of these include that students without Ebola symptoms in boarding schools or sections located in either Mubende or Kassanda districts will be allowed to return home as per the normal official closing date.

“Any learner in the boarding section who has Ebola-related symptoms shall first be evacuated and isolated in a facility or tested for Ebola by the field surveillance team before being declared free to go home,” the guidelines read in part.

The guidelines further show that any learner in the boarding section who is a contact with a confirmed or suspected Ebola case shall be quarantined within his/her school or designated facility and followed up daily for 21 days after exposure by the field surveillance team and verified as safe before being declared Ebola-free and returned to return home.

Futhermore, learners holidays will be in a staggered manner with candidates moving as soon as they complete their examinations.  “Arrangements are being made by the ministry of works to handle their transportation. We will be guiding on, which class will be going home when,” said Mulindwa.

Transport arrangements and pick-up points for learners moving to or out of Mubende and Kasanda districts – the most affected districts shall also be agreed upon between the schools, education officers, and District task force and communicated to parents in time.

Why the Ministry moved to implement guidelines

When the Ministry of Health reported that at least six students from three schools in Kampala’s Rubaga Division had been infected the Ebola virus, the ministry of education immediately ordered the reinstatement of Standard Operating Procedures in schools.

However, many schools have been flouting the guidelines. For instance, although schools were told to stop all visitation and leavers parties, the majority defied and held their activities as they had planned.

The Minister of Education and Sports, Janet Kataha Museveni has directed authorities at the Uganda National Examinations Board-UNEB to ensure that P.7 candidates who have been isolated as Ebola suspects write their final examination.

“No Ebola contact or case that is willing to sit their end of cycle exams should be denied the opportunity to sit their exams…We have guided UNEB to ensure that as much as possible, learners affected by the Ebola Virus Disease, either as case or identified contacts sit their examination from the very schools they have been studying from…,” her message reads in part.

The Minister has also advised that arrangements should be made to ensure these learners stay put. She added that if the affected learners are from neighbouring schools, the health ministry and UNEB should make arrangements to see how they can be transported safely to sit their examination from the same centre together.

The Director of Public Health, Dr Daniel Kyabayinze, said that all the candidates who are now being held in isolation are healthy enough to take their exams. The director also pointed out that since the 27 are from the same school, if they are to sit for exams they should occupy the same room.

“They are only suspects, and in the two weeks that they have been isolated, they haven’t shown any signs or symptoms of the disease. They are fit to take their test. However, the school must take precautions into consideration,” said Dr Kyabayinze.

When our reporter asked how they would be monitored, given exam papers, and how the papers would be handled afterwards, Dr Kyabayinze responded that those that will handle these pupils shouldn’t be afraid because they cannot spread Ebola.

“I am aware that our folks may be anxious. There are many uncertainties around how to handle the exams and so forth, but it is important to remember that these kids will have spent three weeks in isolation at the time of the sitting. They have not yet displayed any Ebola symptoms. They cannot spread Ebola and we should not stigmatize them since that might affect their performance,” he explained.

According to the UNEB schedule, primary seven candidates started their final examination on November 7th with a briefing before embarking on writing two papers on each of the subsequent two days. Before the minister’s directive, UNEB had envisioned such a scenario the day before the senior four examinations. At that time, the worry was among candidates in Mubende and Kassanda districts.

According to the current lockdown restrictions, no one is allowed to leave Mubende and Kassanda districts. Yet, there are many learners studying from these districts coming from many other parts of the country.

However, it should be remembered that during the COVID-19 time, the transportation of students back to their homes was poorly handled, leaving many of them stuck in taxi parks. There were also stories about how students, particularly those from urban areas, ended up spreading the disease to rural areas.

But not everybody agrees to the move to end the school term early.

Dr Kiiza Besigye, the Chairman of the Red Card Front has condemned the government’s move to close schools earlier than expected due to the ongoing Ebola outbreak in the country.

Besigye says the closure of the schools is not in any way related to the outbreak of Ebola but rather an economic crisis, because the government wishes to channel funding intended for schools to other uses. He argued that it is ridiculous for the government to panic and announce the closure of schools before the expected dates but again give schools two weeks before the actual closure.

“It is ridiculous to say that Ebola is spreading in schools but you only close them on the 25th, so what is happening between now and 25th, there is no spread of Ebola…? it’s ridiculous,” Besigye told journalists at the Forum for Democratic Change- FDC Headquarters in Najanankumbi today.

Besigye also argued that it would be easy to control the spread of the virus in schools because that is a regulated environment compared to the case when they are out of school. It is against this background that Besigye called on parents to oppose the government’s directive, arguing that children had for a long time stayed at home and not studied due to the COVID-19-inspired lockdown.

Besigye argued that children are trying to make up for what they missed during the lockdown and that such a closure will be a huge setback for them. He adds that control of Ebola is even easier in a regulated environment like schools.