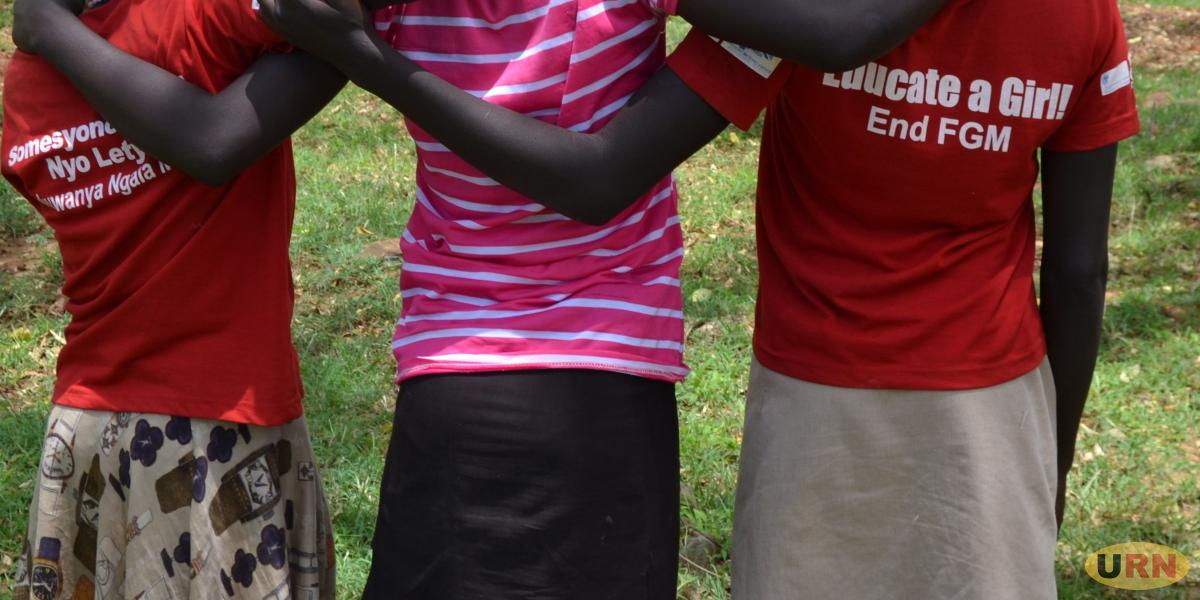 On a hot afternoon, 12-year-old Esther Adongor , is playing with peers under tree shades at Kalas Girls Primary School in Amudat town council. She is dressed in a grey skirt and a red T-shirt with readings in the back ‘education first.’

Adongor tells Uganda Radio Network –URN that she ran away from her parents’ home in Loroo Subcounty after they attempted to cut her genitals as initiation into adulthood. This meant she was going to be married off as soon as the wounds healed. This was during the first lockdown and she was just 10 years old!

She alleges that one afternoon she was informed how ‘aunt’ (a woman who cut female genitals) was going to visit their home. But when she inquired what the function was going to be, she was informed that it was time for her to be initiated into adulthood so that she becomes a ‘full woman’.

Because Adongor had often heard about girls whose genitals were mutilated and later married off, she immediately made a decision to seek refuge at Amudat district headquarters.

“When schools were closed, my parents started talking about me getting married. When I heard about plans to cut my genitals, I decided to run away from home. I miss being with my parents but I don’t want to go back,” Adongor said.

Adongor is among the many girls who recently told their ordeal and rescue to child rights defenders from Equality Now an NGO based in Kenya and Joy for Children Uganda who visited Amudat district to assess the impact schools closure on girls and re-ignition of cross border female genital mutilation –FGM.

By the time schools were closed in March 2020 in a bid to prevent the spread of Covid19, Adongor was in Primary Three. But schools majorly lower classes from Nursery to P3 have not reopened since last year.

The girls are under the supervision of the district leaders who include Community Development Officer- CDO Susan Chuwai. But Chuwai could not speak to URN since she had not been authorized by Resident District Commissioner- RDC, LCV Chairman or Chief Administrative Officer –CAO.

Moses Ntenga, the executive director for Joy for Children, describes mutilation of girls’ genitals as unlawful practice that needs concerted efforts to end it. Ntenga reminds parents to make their homes as the safest place for children.

“Anything that contravenes the law must be fought with equal measures,” Ntenga said. “Covid-19 may remain or go but the impact it will have caused on girls and other children will be generational. The laws against FGM and child marriages must be implemented. In absence of schools, leaders and parents must play their roles.

The Uganda constitution in 34 clauses (3) and (4) provides for the protection of children from being deprived of medical treatment, education or any other social or economic benefit by reason of religious or other beliefs.

“Children are entitled to be protected from social or economic exploitation and shall not be employed in or required to perform work that is likely to be hazardous or to interfere with their education or to be harmful to their health or physical. Mental spiritual, moral or social development,” states the constitution.

The cutting of girls’ genitals is majorly practiced among the Sabiny, Pokot, Kadama and Tepeth found in districts of Kapchorwa, Amudat, Nakapiripirit and Moroto respectively.

Although Adongor was among the first five girls to flee their parents’ homes because of attempts to mutilate their genitals, Kalas Girls rescue center that was started last year now has 32 girls who sought refuge for fear of being cut or forcefully married off.

The girls aged 10 to 17 years are trained by a Catholic nun Sr Annet Nakibuuka in many activities including skills like beads making, mats weaving and tailoring. Like Chuwai, Sr Nakibuuka could also not speak without permission from the school head teacher who was not around at the time of the visit.

Sadly, Evelyne Malian, the area councilor told URN that FGM and forced marriages have been rampant ever since schools were closed. Although Malian did not have figures, she said she had been informed of girls who have crossed to Kenya in order to be mutilated because they have been convinced that without going through that process they are not women.

Malian who is now 34 years old but was also forcefully mutilated at 10 years and married three months later to a 35-year-old man, says parents in urban areas have been sensitised about the dangers of FGM and child marriage.

But Malian acknowledges that it is still a very big challenge in remote areas. Malian said once a girl is cut, she gets married off between one to three months later.

“I wouldn’t wish any girls to experience what I went through,” Malian said. “I was cut at 10 years and I bled for three weeks. They told me that the cutting had not been done very well. They repeated the exercise and I almost died. I cannot allow my two daughters to experience the same.” Malian said.

Agnes Igoye, the deputy coordinator trafficking in persons’ department at ministry of internal affairs, said in July this year they had registered 70 cases of girls who had crossed to Kenya for FGM rituals. Although the internal affairs officials worked with their Kenyan counterparts to have girls returned, many of them had already been raped, impregnated and others breastfeeding.

Moses Logwee, a secretary for Jumbe village, says closure of schools has hampered their efforts to end FGM and early marriages. Logwee says a number of girls have been impregnated because schools were the only solution to prevent FGM and child marriages.

“In this place a girls regardless of the age does not decide on who to marry her,” Logwee says. “In most cases it is an arrangement between parents and a relatives of a person marrying. They negotiate dowry without the girls’ consent. Girls are just grabbed. Unfortunately, we get to learn about such incidents when it is too late. FGM is done secretly ever since government launched a campaign against it

Female genital mutilation according to World Health Organization –WHO can be partial or total removal of external female genitalia or other injury to the female genital organs for non-medical reasons.

WHO says there isn’t any health benefit whatsoever from FGM but the practice is capable of causing severe bleeding and problems of urinating, and later cysts, infections, as well as complications in childbirth and increased risk of newborn deaths.

Uganda parliament passed the Act that criminalized FGM in the 2010 and it states that ““neither consent nor any culture, custom, ritual, tradition or religion is a defence to the crime of FGM in Uganda.”

In addition, article 33 clause (6) prohibits laws, cultures, customs or traditions which are against the dignity, welfare or interest of women or which undermine their status.