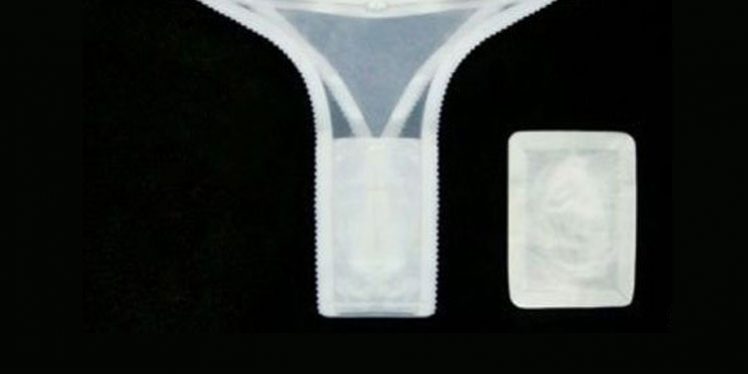 Many at times, we are stuck with no condom as the body agitates towards the ultimate point. Thus we give in to Sexually Transmitted Infections, unwanted pregnancies and so forth. The good news is that panty condoms could save the rush hour of the day.

Speaking at 27th Science café held at Health Journalists Network in Uganda premises in Ntinda, Dr. Moses Muwonge, Director of Samasha Medical Foundation (SMF) demonstrated about the new innovation, panty condom as a prevention mechanism against Hepatitis B &C, HIV and other infections. Vastha Kibirige, National Condom Coordinator at Ministry of Health and Timothy Damulira from UHMG were also present.

A panty condom is a V like or G-string, embedded with a softly wrapped condom on the middle part. It’s made of a polythene material and is non rubber.The middle part has an opening where the penis penetrates through the embedded condom to the virginal.The condom sleeps well on the virginal walls living room for only penetration.Hence there is no need of using your hands to dress the condom.

As a matter of fact, the embedded condom is used once and thereafter it’s pelt off from the middle part and wrapped in tissue for disposal in a suitable place like a latrine. The G-string can be kept to put on another condom, as provided for in the panty condom package or can be fashionably kept as an accessory. The G-strings are designed in all sizes and colors but it’s positioned for the corporate lady.

Fortunately the panty condom is convenient in rush hours, acts as a bargaining tool for a woman in case the man has no condom. Panty condom helps in dual protection against infections/diseases and prevents conception.However besides intercourse; it doesn’t give room for fore play especially the western jazz.

Dr. Mwonge affirms that the condom will be on the market by October this year because it’s still under a London acceptability study of six months, which is done by Uganda National Council Study. “Also there is need for donor funding for the project so that we can equitably give out free panty condoms for social marketing, administer an average price for commercial.”

Kibirige says annually Uganda receives 240million condoms of men and atleast one percent of that for females. “We depend on donors like Global Fund, UNFPA for condoms. Otherwise we don’t have money for condom programming and promotions because we are updating an implementation plan on the National Strategy on condoms.”

“The public should be able to pay for the sustainability of the condom because in 2017,public sector condoms are highly used at 79% and of these 30% are wasted according to the Total Market Approach Report 2016”, Kibirige says.

SMF is at the forefront of marketing and distributing the panty condom. The condom was an initiative and innovation, identified by Path under a collaborative effort and project.Panty condoms are manufactured in Colombia and registered in Germany.