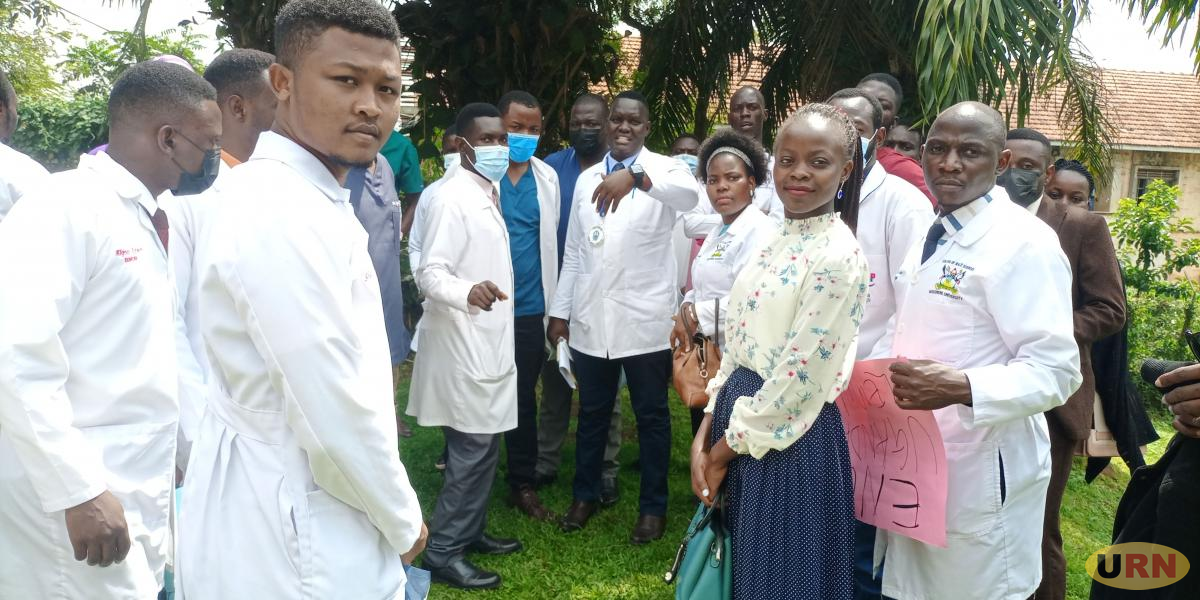 Doctors under the Uganda Medical Association (UMA) have urged their colleagues all over the country who had laid down their tools to report back to work on Thursday.

Dr. Samuel Oledo, the association’s President told journalists this morning that government has finally committed to handle their grievances that include low pay, under staffing, compensating families of those that died of COVID-19 and restocking of drugs and sundries.

He said doctors will receive their enhanced salary of 5million Shillings in July when the new financial year starts.  He says the government has also committed to consider getting them duty free vehicles and that it is now putting together members of the taskforce to handle issues of compensation.

The Association has already submitted names of seven members to sit on this committee. These will be representing and negotiating for families of the 85 health workers that died, of whom 35 were medical doctors.

The doctors went on strike 29 days ago with threats of not bending to any promises but actual actions from government considering that especially the issue of salary enhancement had been pending since 2017 when, while on strike, doctors were promised slow enhancement of salaries every financial year until they hit Shs5million for a junior doctor.

By the time they went on strike this time, their salaries had only been enhanced once to 3million Shillings. Oledo says if government repeats the same tricks this time, they will without notice go back to industrial action on the 1st of May 2022.

The Association’s Secretary General Dr. Herbert Luswata says their glimmer of hope and new decision arise from the fact that the recent 35billion Shillings supplementary budget is catering for medical interns salary of Shs2.5million and restocking of drugs.

He says since the law provides that interns earn half the pay of their senior colleagues, there’s no way government will fail to implement it especially that there’s now a court decision where the Ministry of Health is committing to the pay.

Doctors say their negotiations were crosscutting all through the medical fraternity as the changes will also be effected for graduate nurses and medical laboratory professionals who only announced their strike on Monday.

However, the Medical laboratory professionals insist that their grievances haven’t been attended to and that they are having their in their Day 2 of industrial action.  Speaking to URN, Patrick Dennis Alibu the Laboratory Association Secretary-General said they want government to pay Graduate lab professionals, the same pay of Shs5million as the medical doctors.

But, Oledo says, the absence of the lab technicians will not stop them from attending to patients and that they are better off calling off the latest strike.