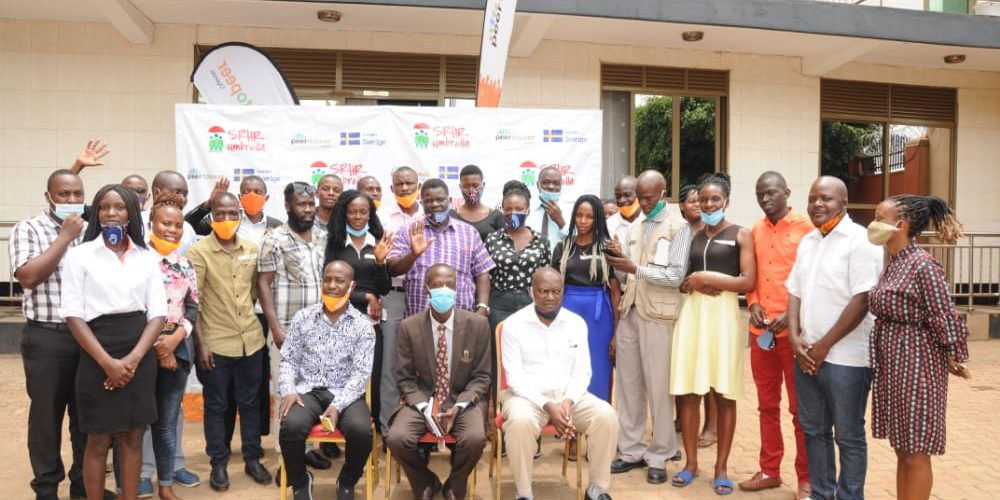 Journalists in Busoga sub- region have been urged to embrace the health reporting beat in order to improve the health literacy and awareness among their communities.

The call was made by Daniel Saire, Iganga District Communications Officer while addressing journalists from the region during two-day media workshop organized by Peer to Peer Uganda (PEERU) in partnership with the Health Journalists Network in Uganda. The training was aimed at  creating awareness and understanding of Universal Health Coverage (UHC) and National Health Insurance Scheme Act 2019 through appropriate reporting. It took place at Hotel Continental-Iganga district.

Saire revealed that health reporting is not prominent in the region, health issues do not get the attention they deserve as majority of the journalists focus on political stories. He called upon journalists from the region to take on the health beat, noting that there are many health challenges in the region that need to be given ample attention so that solutions are found.

“I encourage journalists in Busoga region to pick interest in health reporting, give it attention and start highlighting health challenges affecting our people. I know politics is a ‘selling’ beat but benefits a few people (politicians), while health impacts large larger masses,” he said

“Ordinary people get tired of listening to political news every day. Talk about other issues that affect their everyday life such as health, agriculture, environment among others.

Journalists mentioned challenges that are hindering them from embracing health reporting. Some of the challenges include; negative response from the would be sources such as hospital administrators and district health officials, limited number of specialists to avail health information, lack of interest and motivation to report about health, lack of local science networks, lack of facilitation to pursue health related stories, and for many of them, their media houses do not allow them to do specialized reporting, they must report about everything.

David Lukakamwa, Presenter/ Talk show host at Kiira FM said finding health sources is a struggle for many journalists. “Most people in the health system in the region do not want to talk to journalists. They shun us. This makes many journalists not to have interest in health reporting,” Lukakamwa said. After the training he committed to advocate for health issues every day (Monday-Friday) during his 2-hour talk show.

He also called upon different organizations to come up and train journalists in the region, in the health beat, noting that many journalists have not embraced health reporting because they do not understand it (health beat) well.

Vivian Agaba, a health journalist and member of Health Journalists Network in Uganda (HEJNU), who was one of the trainers during the workshop told the journalists to work towards creating a good working relationship with sources especially scientists by ensuring that they do not misquote them.

“When a scientist or any other source gives you information, and you misquote him or her, this ruins the relationship and the person may never trust you again, and later on give you more information. Always endeavor to write correct information. In health reporting, facts are a must, because you are dealing with lives of human beings,” she said.

Agaba encouraged the journalists to join associations as these have benefits such as accessing contacts of health/science sources, grants, scholarships and training opportunities. Other topics discussed during the training include; Principals and Practices of Health Journalism, communication techniques in advocacy, youth and sexual and reproductive health rights (SRHR) situation in Uganda, gender based violence (GBV) and HIV/AIDS. Ends