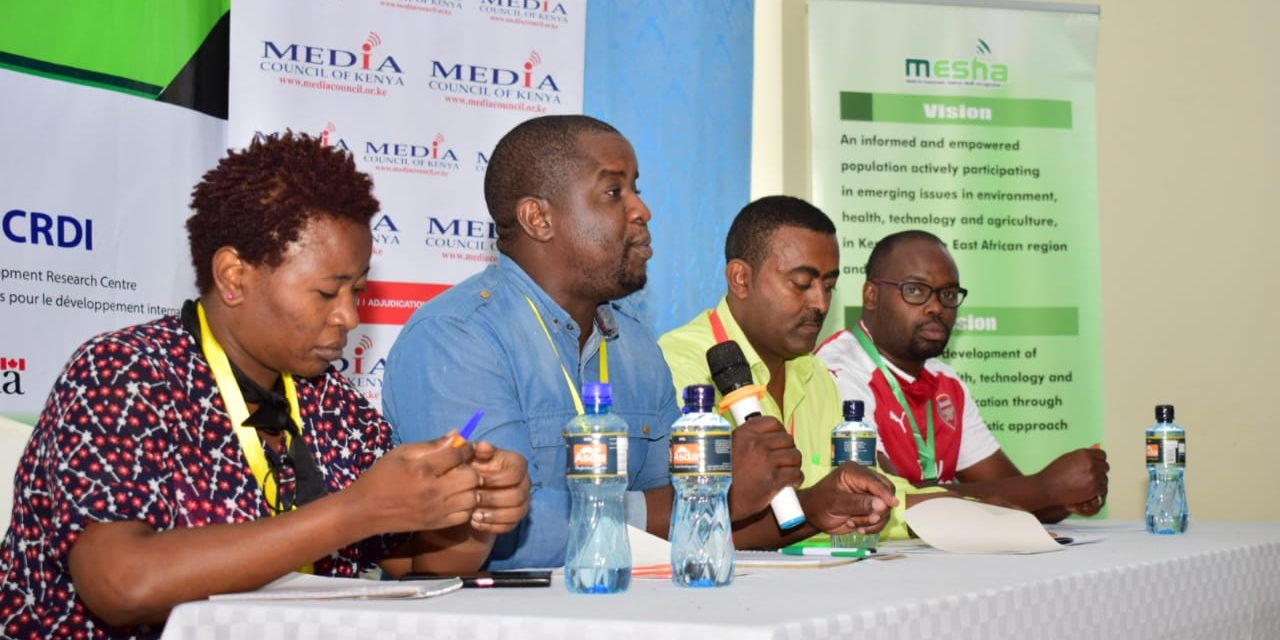 More journalists in Africa are taking on the science beat and the quality of reporting it is picking up, according to media experts.

He said this while giving a lecture during a virtual meeting to celebrate Media for Environment, Science, Health and Agriculture (MESHA’s) 15-years of existence in mid-February. The lecture was titled: “Preparing for the future of Science Journalism in Africa. It was attended by science journalists from across Africa and friends of MESHA.

Speaking of the importance of belong to an Journalists Association.

Zahara Namuli, a senior Health News Reporter at NBS TV shares her experience. In 2019, she was among women journalists that won the continental Women in News (WIN) Leadership Accelerator Programme. The opportunity was shared in the Health Journalists Network in Uganda (HEJNU) platform, where she is a member. She applied, and was accepted in the training.

The benefits for the successful applicants of this programme include: one-on-one coaching to create a 3-to-5 year career roadmap, certified media management training, gender balance in content training, leadership hubs and managing sexual harassment training. She says she has benefited a lot from this training and it has made her understand some of these topics better as well as creating a network with other journalists.

Expounding more about the future of Science journalism in Africa, Dr. Wendo pointed out some of the ways journalism is changing, the implications, and what journalists ought to do to move with the changing times and still thrive in the profession.

First, the news media still create content but digital platforms will control access to audiences, and this influences advertising revenue.

Secondly, people will have access to more diverse sources of information, implying there will be more competition for audiences. Thirdly, journalism is often losing battle for attention and trust. Many people are no longer interested in news (news avoidance).

“People turn off the news because it feels irrelevant and depressing and does not help them live their lives; they often turn to entertainment or social media instead,” he said. For instance, in an article by Antonis Kalogeropoulos, a lecturer with the Department of Communications and Media, which was originally published by `The Conversation’ reveals that when the Corona virus pandemic started to take hold in the UK in March, news consumption increased, as in many other countries. But, since then, their research shows that an increasing share of the UK population is switching off from the news.

Dr. Wendo also noted that the media are facing a tougher business environment, leading to cost-cutting, job cuts and less funding for stories.

However, amid all these challenges, the media practitioners are becoming more innovative to try and remain competitive and on top of the game.

Dr. Wendo shares important tips how science journalists can manoeuvre through the changes and prepare for future journalism.

“Tell stories that sell, master how to earn a living, seek learning opportunities, keep in touch with scientists, understand the basics of science and develop the ability to challenge science.

The stories also need to be more accessible, timely, informative, interactive and engaging to compete.

The report argues that these five trends will play out – with variation due to cultural, economic, political, and social context – across the globe in years to come.

Steve Werblow, the Vice President, International Federation of Agricultural Journalists in his opening remarks applauded MESHA for withstanding the storms the journalism profession is facing globally to create a mark in the region and being an inspiration around the world.

He said we are living in an era where reporters around the world have been threatened, attacked, imprisoned and the media is called an army of the people, science has been politicized and ignored, but MESHA has defied all these times and brought together people around science.

Speaking from USA, Steve acknowledged that MESHA has built bonds that build synergies and educated the audiences about science related issues such as climate change, water, COVID-19, and just as vital, have educated each other in their respective science media cafes, science magazines and blogs.

“You have reached out across the region and beyond borders. The quality of journalism and dedication that you have demonstrated is just tremendous. You are an inspiration around the world. Let us work together to build a strong and professional journalism,” he stated

Violent Otindo, the MESHA Chairperson thanked the Association’s leaders who are exceptionally talented, hardworking, dedicated and committed to accomplishments and success of the association. She pointed out that the association’s ongoing success would be impossible without the committed leaders. “Thank you to all of our founder leaders who continue to believe in us and help us endure and thrive throughout the years. We celebrate this milestone occasion because of you.” Otindo stated

She however reminded the leaders and members that in the midst of the celebration, it is not the time to sit back and become complacent.

“We must continue to focus and execute on the things we do well and develop the areas in our association that need improvement. It is time to reflect on the wisdom gained and on the successes and lessons learned along this journey.

Aghan Daniel, the substantive Chief Executive Officer (CEO) and MESHA Secretary pointed out that as an association, their goal is to ensure they grow the body (MESHA) and impact what is happening globally in the field of science journalism.

MESHA is a model African science journalists association. It was started in November 2005, with only five members, but currently, it has 70 members in Kenya and 80 in 20 other countries in Africa.

From inception, their main goal was to deliver exceptional Science news to help Kenyans be informed and empowered conscious of emerging issues in agriculture, environment and health issues …. And lately I innovations. But overtime, their goal has expanded beyond Kenya and encompasses other African countries like Kenya, Uganda, Rwanda, Burundi, Tanzania, Ethiopia, Malawi to mention but a few.

The association continues to serve the media community in delivering quality services that empower beginning, middle and seasoned journalists as well as communication officers, government and non-governmental organizations.

As some speakers said during the virtual celebrations, let’s wait and see what the next 15-years have in store for MESHA.